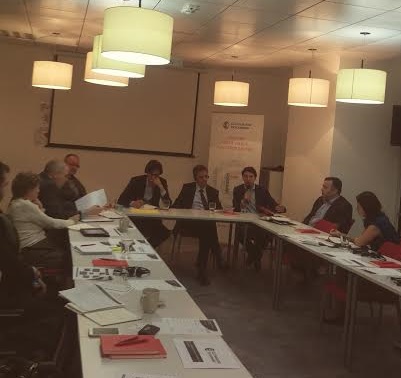 Bucharest, November 12th, 2015: Mr. Florin CONSTANTIN, Founder of AGXECUTIVE and Vice-President of the French Chamber of Commerce, Industry and Agriculture in Romania (CCIFER), has moderated a seminar on Competitive Intelligence as source of competitiveness for the Member companies of the Chamber. In the panel of speaking experts there were specialized CI consultants and professionals from agricultural machinery and automotive sector. The participants came from various sectors such as Big4 consulting, law firms, banking, IT and food. The seminar focused on three main subjects:

1.  Academic studies and professional training: a comparative analysis has been performed between France and Romania with focus on existing programs, public-private partnerships and the subsequent career opportunities for graduates.

2. Then, the defensive aspect of the competitive intelligence has been exposed, showing how small and large companies can defend themselves, by applying several good practices, against cyber threats, HUMINT aggressive initiatives, elaborated financial scams, but also how they can effectively protect their immaterial capital of intellectual property in international asymmetric contexts.

3. Last but not least, the participants debated on the high potential of competitive intelligence to offer effective levers for structured commercial prospection, “know your customer” analysis especially for exporting companies exploring new “exotic” markets, but also its’ capacity to provide due diligence support for mergers & acquisitions and building compliant advocacy initiatives in the normal civil dialogue with authorities and public stakeholders.

The participants concluded on the necessity to expand the public exposure of competitive intelligence in 2016 via a Conference. It will follow-up the general initiative of CCIFER in favor of enhancing the economic performance of Romania started in 2015 with the White Book on Competitiveness. The Conference will focus on the development of the industrial tissue starting from the competitiveness clusters and going towards integrated ecosystems of companies.